Regular readers will know of my passion for environmental issues and animal welfare. That’s why I joined with the Environmental Investigation Agency campaign in Parliament to call on China to demonstrate conservation leadership by closing the markets for trade of body parts of tigers, and other big cats. We must tackle the poaching of these wonderful animals.

In Rochdale town centre, I met with John Wigley from the Sanctuary Trust at the Reaching Out Centre’s Soup Kitchen, and discussed about the work they do and learn more about the Real Change Rochdale fund, which was set up to provide direct support to people who are homeless. I’m planning to attend the next meeting at the Champness Hall in Rochdale town centre, to meet other charities and organisations involved at the Reaching Out Centre and talk about ways they can work together to provide much needed support.

At the weekend I attended this year’s Littleborough Rushbearing Festival, which started at the King William IV pub followed by a small ceremony at St Barnabas church, where the procession continued into Littleborough to watch the very talented musicians and dancers demonstrate their skills. Rushbearing is an old religious festival where rushes are collected and strewn on the floor of the parish church, dating back to a time when most buildings had earthen floors and rushes were used as floor coverings and insulation. Later that afternoon, I visited Brookfield Park to take part in the Holiday Jamboree Family Fun Day. It was a great neighbourhood celebration organised by the Nigeria Community Association, with large numbers of the wider community coming out to support the event including the Link4Life charity, GMP, and Councillors Sultan Ali and Mohammed Zaman.

Sunday 21st July was the last day at the RHS flower show at Tatton Park where Petrus PIER, a Rochdale community gardening group, won the People’s Choice award for their display ‘Petrus Paradise’, based on the Persian Gardens, which aimed to raise awareness of the support they provide for people who are homeless or at risk of homelessness. It was a pleasure to congratulate Rachel Bennion and the service users who worked very hard on the display which featured water displays, mosaics, and a sheltered area which represented safety, respite, sanctuary, and relaxation.

At Monday’s Shadow Cabinet meeting we discussed at great lengths the Party’s determination to stamp out anti-Semitism. Anti-Semitism has no place in our Party and our society. The new ‘summary expulsion’ system was launched to ensure that cases are sent to disciplinary bodies in the Party who are advised on proceedings by an independent barrister who is an expert in discrimination law. Education materials have been released for our members and supporters to help them recognise and confront bigotry wherever it arises. You can view them here.

We also discussed Labour’s policy to set up the National Care Service to tackle nine years of cuts imposed by the Tories and their Lib Dem partners. Since 2010, we have seen £7.7 billion taken out of social care funding. Hundreds of thousands fewer people are receiving the care they deserve and local authorities are receiving 5,000 requests for care every day, putting pressure on unpaid family carers, of who there are now 6.5 million. 2.6 million people have quit their job to care since 2017. According to Age UK, 1.4 million older people go without they need, and since 2016 there has been a 4% increase in working age adults approaching local authorities for support from social care.

It’s clear that social care under the Tories is failing, and we need to make long-term and sustainable solutions to the issue of how we provide care and support to older people and working age adults. We discussed that in Labour’s first term of government, we will lay the foundations for the National Care Service by increasing social care budgets by £8 billion in the next Parliament, and work with councils to end 15-minute care visits and tackle the exploitation of staff on zero-hours contracts, ensuring care workers are paid for travel time and given access to training and the option to choose regular hours. Improving the quality of social care is a vital part of providing dignity in older age and support and independence for people who are vulnerable or have disability or a mental health condition. You can find out more on how we will improve the quality of social care here

I joined my Labour colleague Martin Whitfield MP to pledge my support for the Any Disability campaign to create a new symbol which accurately represents the full range of people with various disabilities who use accessible toilets and other facilities. Many people in Rochdale live with hidden disabilities, and experience difficult challenges and negative responses while going about their daily lives. The Any Disability campaign increases awareness and highlights the need for greater understanding about the challenges faced by so many people living with a wide range of conditions.

I also attended a session on the National Infrastructure Assessment, which aimed to set out how our transport, energy, water and technology networks should develop over the next 30 years. The assessment highlighted the weakness and ineffectiveness of Tory Government. Devolved funding for transport and roads, rolling out full-fibre broadband locally, and setting ambitious targets for renewable energy for the next 30 years ought to have been developed already.

The All-Party Parliamentary Group on Football met to discuss the future of lower league football, and how top clubs are hoarding too much of the cash. Not enough revenue trickles down the leagues, with the Premier League’s solidarity payments to the English Football League being received predominantly by Championship clubs with League One clubs such as Rochdale AFC, and League Two clubs receiving far smaller amounts. Second tier clubs receive 80% of the cash, League One clubs 12% and League Two clubs 8%. Football plays an important part in people’s lives and Rochdale AFC attracts around 3,000 home fans per match, so it’s important that government policy doesn’t just focus on national and premier league teams, but focusses on local teams as well.

In Rochdale many people have contacted me about their concerns over a No Deal Brexit. That’s why I met with manufacturing shop stewards from Unite the Union who visited parliament to meet MPs and urge the new Prime Minister to take a No Deal Brexit off the table. It could be the end of British Steel, and car imports could increase which will affect British car manufacturers Jaguar Land Rover and Rolls-Royce. The destruction of our manufacturing sector may be a price worth paying for Boris Johnson, but real jobs and real livelihoods are at stake.

On Thursday the President of the World Uighur Congress, Dolkan Isa, visited Parliament to discuss setting up an All-Party Parliamentary Inquiry on the treatment of Uighur and other minorities in the Xinjiang region in China. 22 countries, including the UK, signed a letter to Michelle Bachelet, the UN High Commissioner for Human Rights condemning China’s treatment of Uighur other minorities, also urging China to allow meaningful access to Xinjiang for UN and independent international observers.

Despite the persistent heavy rainfall over the weekend, I was delighted to meet 8-year-old Jack Adams, with his sister Isabel and their mum Clare, at the Plastic Patrol clean up event on the banks of Rochdale Canal. Jack sent me a letter outlining his concerns about plastic pollution and the affect this is having on our wildlife. What we do with non-recyclable plastic is one of the biggest challenges we face, and the urgency and seriousness of the situation has never been clearer. I was so pleased that Jack cared enough to write to me about this, and it’s so inspiring to see young people care about the environment and the future of our planet. The clean-up was a great success, and one litter picker even found a Mars bar wrapper priced at 19p, which she shared on Twitter. Twitter users were quick to point out that the last time a Mars bar cost 19p was in the late 1980s, which shows how long non-recyclable plastics last after use.

We enter in the Summer Recess with Boris Johnson as our new Prime Minister. Boris has been repeatedly called out for his casual approach, for example the reckless comments he made as Foreign Secretary which led to a British citizen facing five years in an Iranian prison. He simply doesn’t understand that plans for trade in a No Dela Brexit won’t work, and has been called out by the Governor of the Bank of England, the Head of the World Trade Organisation, and even the Tory’s own Trade Secretary. We could have a general election at any time and it will define the direction of our country, so make sure your voice is heard by registering to vote. You can register to vote here.

At the end of July, the country saw the highest level of weekend rainfall recorded in Rochdale as more than a month’s rain fell in just 48 hours. Several roads were closed, and Greater Manchester Fire and Rescue dealt with reports from residents and businesses whose cellars and basements were flooded. The damage to property was minimal by comparison to the floods in 2015 and most businesses, such as Buckley Menswear in the town centre, was able to trade as usual. Lubana, a local resident, came out to express her gratitude to local volunteers like Sheraz spent a huge part of the night making sure people were safe in their homes.

I also joined The Mayor of Rochdale, Cllr Billy Sheerin, at Rochdale Foodbank which is affiliated to the Trussell Trust. According to the Trussell Trust, a nationwide organisation of food banks, 1.6m food bank parcels was provided to people in the country in the past year, and they are very clear that cuts to social security and the five-week wait for Universal Credit payments are key reasons for the rise. The UK is one of the richest countries in the world and the sharp rise in food bank use is shocking. Nobody in our society should be forced to turn to food banks to survive. Jay (pictured below) is one of many people grateful for the help he has received at Rochdale Foodbank, who have helped him at a time in his life when things were difficult. Thanks to the hard work and dedication of the volunteers at Rochdale Foodbank, those who need emergency food and support have a place to turn to and the dedication of their volunteers strengthens my belief in people’s commitment to care for others. 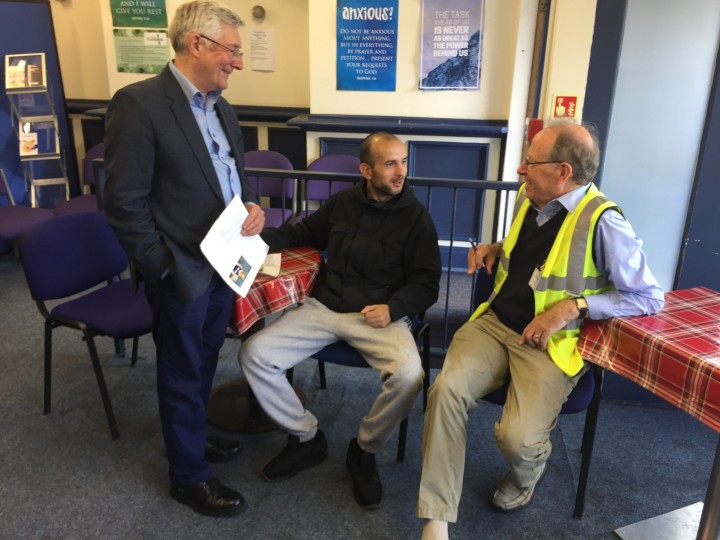 Letter from Parliament (August 2019) was first published on Rochdale Online on 12th August 2019.